Tips And Tricks For Dealing With A Picky Eater 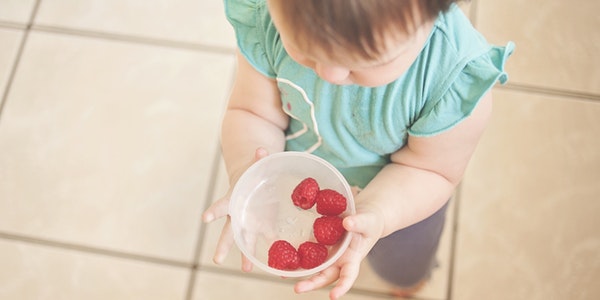 This article is about feeding your picky eater.

My four year old daughter is a firm believer that fruits and vegetables are curse words. They’re dirty, terrible things that no one should ever speak of. The only vegetable she’ll eat is a potato, and that’s only in French fry mode, so I’m not sure that even counts. She’ll eat apples and bananas and maybe, if I’m lucky, and the moon is in the right phase, and I’m holding my head at the perfect angle, she’ll eat a few strawberries. So that means no corn or green beans. No carrots or broccoli or spinach. No summertime watermelon or raspberries.

Unfortunately, it’s not just fruits and veggies that this kid has an aversion to either. It seems to be anything that she even thinks might, maybe have a shred of nutritional value to it. The only time she’ll eat any kind of meat is a McDonald’s chicken nugget, or hamburger meat that’s mixed into her spaghetti. Every once in a while she’ll eat some of those pressed together, not-so-sure-if-it’s-even-really fish, fish sticks. She is the quintessential picky eater.

Otherwise, she lives off of a steady supply of Ramen noodles, hot dogs, Kraft macaroni and cheese, and microwavable cheesy rice cups. None of which have any vitamins or nutrients in them.

Her pickiness was a gradual build over time. When she first started baby food she ate most anything. But as she got older, and started experimenting with solid “people food”, things started going downhill. One day, she loved sweet potato casserole, the next day she’d turn her nose up to it. One week, she loved baked beans, the next they sent her into gagging fits. She quite literally stopped gaining weight. From the ages of 1 to 2 years old, she weighed 19 pounds. We tried PediaSure twice a day; nothing. We tried to give her no other option than to eat the food we’d offered her, she simply just wouldn’t eat at all. We were eventually left with no other choice than to just give her the foods that she would eat. Something HAD to be better than nothing, right?

Finally, at four years old, and 30 whopping pounds, we’re starting to figure a few things out; a few sneaky little tricks to slip in some extra goodness without her noticing.

I mean, c’mon, what kid doesn’t like a big milkshake or smoothie? They’ve been our saving grace with this kid. There are very few things you can’t hide in a milkshake, and I don’t mean just fruits! Some spinach can easily be hidden in a fruit smoothie. Throw together a milkshake with some frozen yogurt, some banana and cocoa powder, and a big ole scoop of peanut butter. It’s a good way to sneak in some of those fruit and veggie nutrients as well as some protein from the peanut butter. Swapping out regular ice cream for frozen yogurt makes it an even better, healthier option. And they’ll think it’s a wonderful treat every day.

There’s just no possible way to get all the needed vitamins and nutrients needed in a picky kid with food alone. No matter how many milkshakes they’re drinking, there are still things they’re missing out on. To help make up for that a daily multi-vitamin is a wonderful choice. Even if your kiddo happens to be one that will eat anything, a good, well-rounded daily vitamin isn’t a bad idea for any growing child. It helps to ensure that even on a picky, puny day; they’re getting the things they need to stay strong, growing and healthy. Plus, we’re beyond the days of the chalky, nasty Flintstones vitamins of our childhood. Now they have all sorts of tasty gummies and different characters. I’ve even seen gumballs that they chew on for a few minutes!

Milkshakes aren’t the only way to get sneaky! My daughter loves spaghetti. It’s one of her favorite meals. So I try to make it at least once a week. Even your regular ole canned spaghetti sauce is made with tomato and it’s pretty easy to slip a few extra veggies in there; a bit of grated carrot, or even a handful of spinach that’s been run through the food processor. Carrot and sweet potato blend flawlessly into some breakfast muffins. My daughter is the queen of picky eaters and she can’t even tell. Sometimes it’s not much, but every little bit you can sneak in, the better.

Is it likely that my daughter is even going to take the tiniest of bites of those green beans that I put on her dinner plate? Probably not. But I still always put them on there. I make sure to have something available at meal times that I know she’ll eat, but I always fill her plate with everything that we’re having, too. I want her to become familiar with the look and smells of different foods. I want her to see that we’re eating it, as well. I want it to be available to her on the off chance that she may decide to try a little bite. Maybe, just maybe, she’ll go to scoop up a spoonful of rice and accidentally grab a kernel of corn. And MAYBE, if I’m super-duper lucky, she might actually like it.

We tried this. We tried not giving her any other option than to eat what we were eating. We tried to make her at least take a bite and try it. This led to a lot of stress, a lot of long dinners, a lot of crying and a couple of vomiting spells. It’s just not worth it. And when you think about it, how would we like it if someone told us that we HAD to eat something that we didn’t like? We shouldn’t do that to our kids either. This will only lead to more, bigger issues. And if you have a child that’s a stubborn as mine, they literally just won’t eat. That’s certainly not a good answer either.

I think every child will go through a picky stage at some point or another in their lifetime. Some of them grow out of it, some of them don’t. I have adult friends who are still extremely picky eaters. They know what they like and they stick to it. It happens. Everyone has different tastes and preferences.

Keep their pediatrician updated and aware and work with them to make a plan to keep your little picky eater healthy and strong. If their doctor is satisfied and they’re growing and gaining the way that they should, try not to worry about it too much. Do your best to sneak in a little extra, secret vegetable here and there and keep them on that vitamin. As long as you’re doing your best, those Ramen noodles won’t hurt them.

Parenting Tricks To Get Your Kids To Eat Their Vegetables

Seven Tricks To Getting Your Fussy Baby Down To Sleep